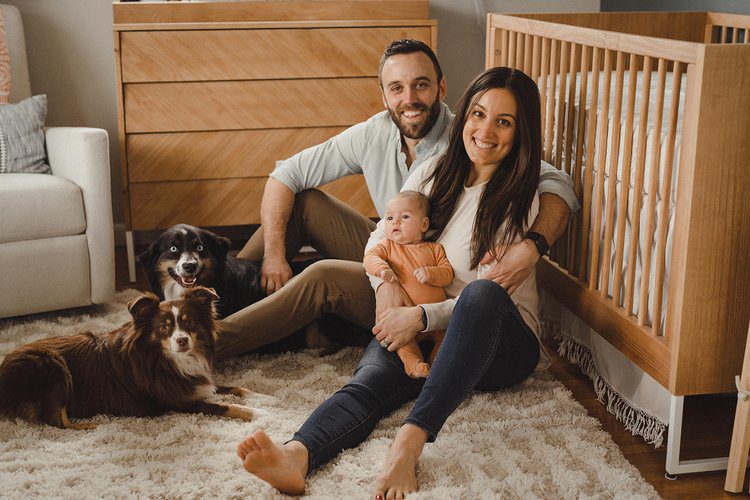 When Courtney and Eli Hutchison married in 2018, they knew their life together would be full of adventures.

They met five years prior while working for Tough Mudder, which hosts obstacle courses around the country. A shared love of hiking and skiing inspired a cross-country move to Seattle, where they were determined to cross off their bucket list of travel destinations before having kids.

They barely slowed down when they decided they were ready to build their family in mid-2019. They started trying in the months after finishing an Iron Man race, and Courtney found out she was pregnant just two days before leaving for a hiking trip in the Italian Dolomites.

But later that summer, something happened that stopped the busy couple in their tracks. Nine weeks into pregnancy, Courtney had a miscarriage.

They were shocked and heartbroken, but they kept moving forward. They got pregnant again as easily as the first time, but suffered another loss at the nine-week mark.

They needed time to rest and recuperate—which for them, meant a trip to Japan. “Anytime anything took a bad turn, we would plan an escape,” Courtney says. “That’s what I needed to reset and feel like myself again.”

After a third miscarriage in the summer of 2020, they decided it was time to seek help at Pacific Northwest Fertility. They had no problem getting pregnant—they just couldn’t stay pregnant. And they wanted answers.

“It was an immense sense of loss,” Courtney says. “I blamed myself and my body a lot. I have a type A personality, and I felt so out of control.”

After meeting with Dr. Rothenberg, the couple learned that they had even more challenges ahead. Courtney’s ovarian reserve was low, which meant that it could be a long road to viable embryos. She also learned that she had uterine scarring from undiagnosed Asherman’s syndrome, and carried a rare genetic condition that meant any male children would have a 50% chance of developing blindness.

Though the news was unsettling, they were also relieved to have more information. “The science gave me permission to not blame myself anymore,” Courtney says. “I felt empowered by knowing it wasn’t my fault.”

Their first egg retrieval only yielded one promising embryo, but they were prepared for that. It wasn’t the mountain climbing they were used to, but IVF required its own kind of endurance.

They immediately started a second round that yielded three more strong embryos—such an encouraging number that Dr. Rothenberg called the Hutchisons personally to deliver the news. “I’ll never forget that call,” Courtney says. “I was sitting on my Peloton, happy-sobbing.”

But they weren’t out of the woods yet: their first embryo transfer didn’t work. For Courtney, a natural planner who’d tried to do it all perfectly, the news was devastating.

She leaned on her community for strength, including a group of girlfriends who all met through PNWF. And in April 2021, Courtney and Eli transferred that one precious embryo from their first retrieval.

That was their daughter Hazel. She was born on January 23, nine days past her due date. “My body was just so happy to finally have her and didn’t want to let her go,” Courtney says.

Though it was a long and difficult journey, parenthood is the sweetest destination the Hutchisons have ever reached. “Hazel is such a joy and worth every moment of the pain we went through,” Courtney says. “She’s our adventure buddy.”